Frida Kahlo Story
click for: Frida Kahlo Photo exhibition in Baden-Baden
Facebook
These and 200 more photos are part of our exhibition.  We are happy to share them with our Kunstmuseum Gehrke-Remund visitors, all the Frida Kahlo fans, with our friends and with you. 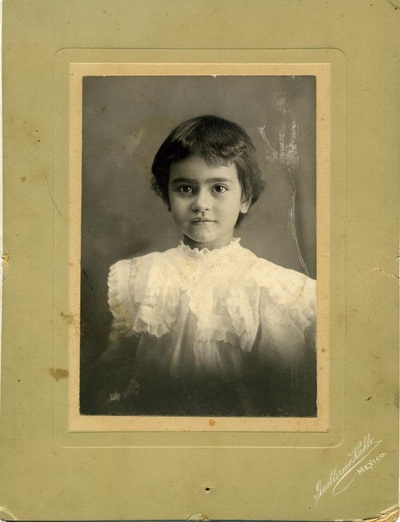 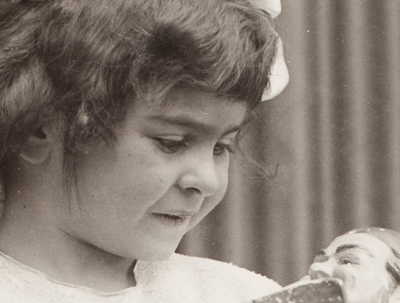 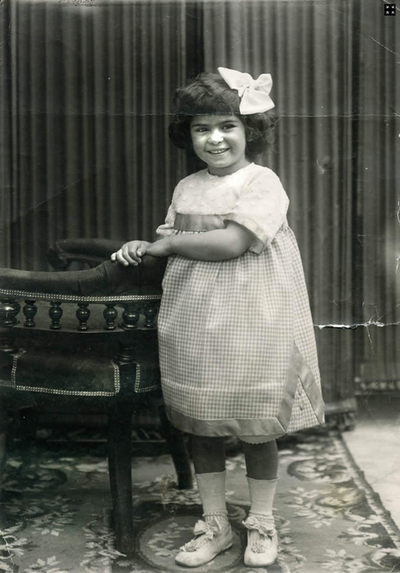 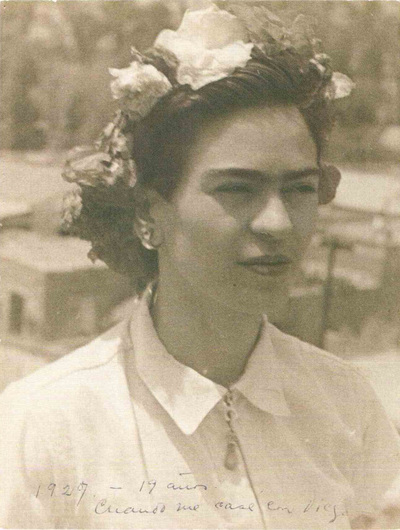 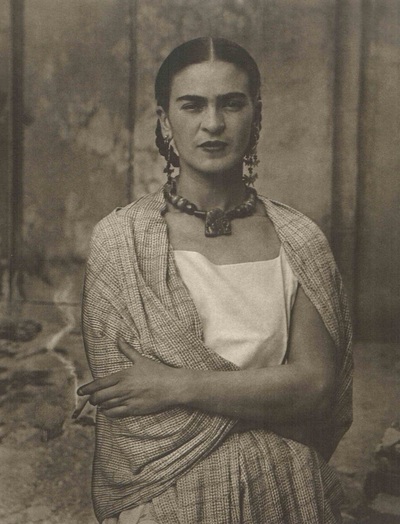 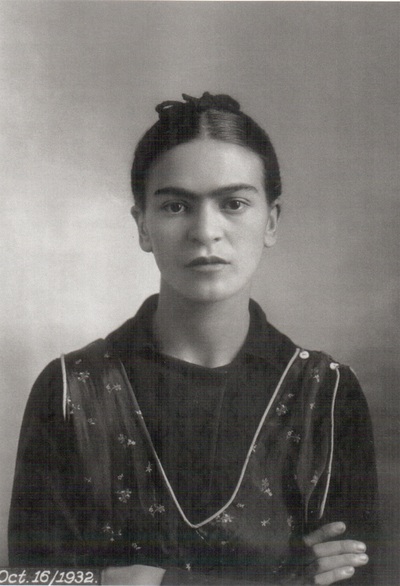 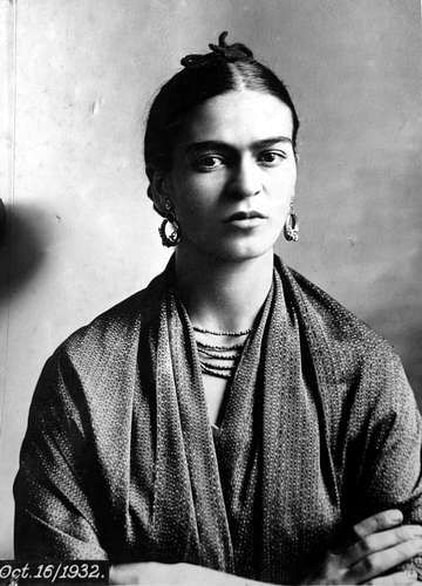 Her life
Frida Kahlo, the world's most famous woman painter, was an artist, a political activist, the wife of Diego Rivera, lover of Leon Trotsky, Josephine Baker, and a legend in her own lifetime.
Her short, and turbulent and eccentric life was marked by passion and eccentricity, inner strength and temperament. She left us with a unique art collection; her works a painted diary. 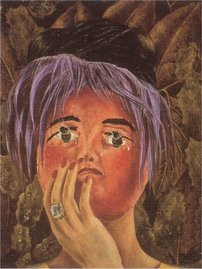 Frida Kahlo: The Mask, 1945 Oil on masonite, 40 x 30,5 cm, Collection Dolores Olmedo, Mexico City, Mexico Licensed replica: ©Banco de Mexico Diego Rivera & Frida Kahlo Museums Trust/VG Bild-Kunst, Bonn 2008
Many of Frida's self-portraits suggest that the face shown in the painting is just a mask behind which her true feelings are hidden. In this painting this principle is reversed; a papier-mâché mask shows the feelings which Frida's face does not reveal. Here, Frida hides behind a weeping purple-haired mask that expresses her feeling of craziness…
the real Frida watches us through holes in the mask's eyes.

André Breton aptly described her art as "a ribbon around a bomb." She had the courage to show her life in front of our eyes and to reveal her inner world in a very realistic yet poetic way. 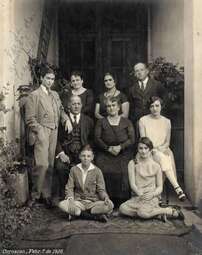 Frida Kahlo, 1926, Photo by Wilhelm Kahlo, her father.
The mistress of self-portraits, Kahlo had the courage to depict herself and her life openly and honestly to reveal her sufferings in the most realistic yet poetic way.
Kahlo's life began and ended in the same house: she was born in 1907 in the district of Coyoacan, Mexico City, and died in 1954 in her family home, La Casa Azul, the Blue House.

At the age of six, she was stricken with polio. It affected her right leg. She spent nine months in bed.
She had a special relationship with Germany.

Her father, Wilhelm Kahlo, was born in 1871 in Germany and grew up in Baden-Baden before immigrating to Mexico at the age of 18.
She studied in Mexico City at the National Preparatory School; her desire was to become a doctor, as an almost fatal bus accident at age 18 that left her physically impaired and changed her life forever. Following her accident she began painting intensely. 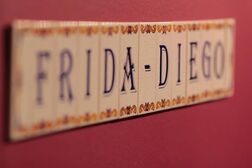 Kunstmuseum Gehrke-Remund
At the age of 22, Kahlo married Diego Rivera. Rivera was 21 years older, the creator of monumental murals with the reputation of being a womanizer. Together they lived in San Francisco, New York, Detroit and Mexico City.  They divorced ten years later and remarried one year after the divorce.
From 1944 onwards she underwent a total of eight spinal surgeries as a result of the bus accident.
Two years later, she joined again the Communist Party of Mexico.
Another seven spinal surgeries in 1950 forced her to a nine-month hospital stay. During this time she continued to paint, taught her students and remained politically active.
On July 13, 1954, Kahlo died in the Blue House as a result of lung embolism.

Her last diary entry read: "I hope the exit is joyful and I hope never to return."

Frida and her sisters - Adriana, matilda and cristina 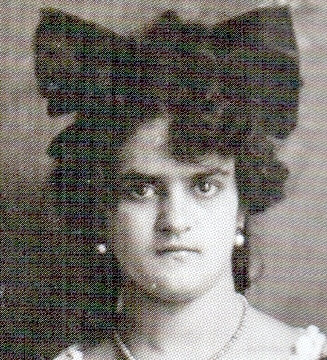 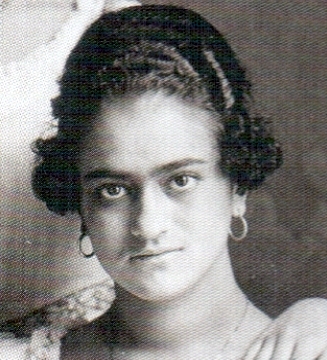 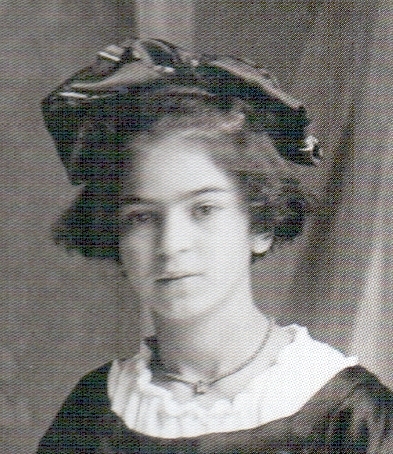 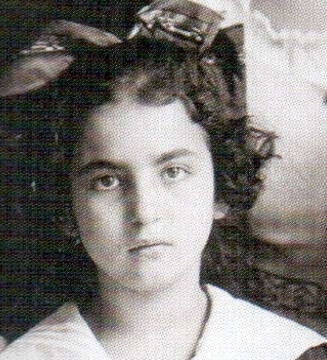 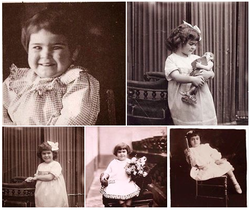 The very young Frida. Photos by Guillermo Kahlo, her father.
Frida's parents were married soon after the death of Guillermo's first wife, which occurred during the birth of her second child. Although their marriage was quite unhappy, Guillermo and Matilde had four daughters, with Frida being the third. She had two older half sisters who were raised in the same household. Frida remarked that she grew up in a world surrounded by females. However, during most of her life, Frida remained on amicable terms with her father.
Source: http://en.wikipedia.org/wiki/Frida_Kahlo

These and 200 more photos are part of our collection and our exhibition.  We are happy to share them with our Kunstmuseum Gehrke-Remund visitors, all the Frida Kahlo fans, with our friends and with you. 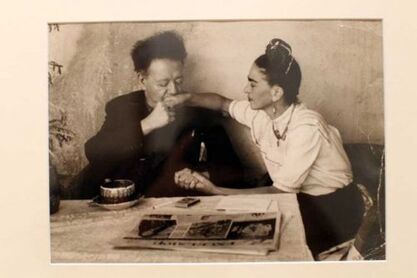 From the age of ten, Rivera studied art at the Academy of San Carlos in Mexico City. He was sponsored to continue study in Europe in 1917
In Paris he lived and worked with the great gathering of artists where his friend Amedeo Modigliani painted his portrait.
In those years, Paris was witnessing the beginning of cubism in paintings by such eminent painters as Pablo Picasso and Georges Braque.
From 1913 to 1917, Rivera enthusiastically embraced this new school of art. Around 1917, inspired by Paul Cézanne's paintings, Rivera shifted toward Post-Impressionism with simple forms and large patches of vivid colors. His paintings began to attract attention, and he was able to display them at several exhibitions. 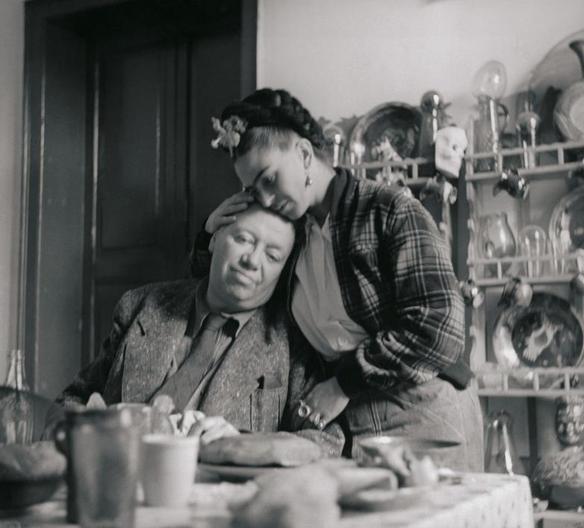 In 1921  Rivera returned to Mexico to become involved in the government sponsored Mexican mural program. His first significant mural is in the Auditorium of the National Preparatory School in Mexico City painted while guarding himself with a pistol against right-wing students.
In the autumn of 1922, Rivera participated in the founding of the Revolutionary Union of Technical Workers, Painters and Sculptors, and later that year he joined the Mexican Communist Party.  Rivera developed his own native style based on large, simplified figures and bold colors with an Aztec influence clearly present.
Rradical political beliefs, his attacks on the church and clergy, as well as his dealings with Trotskyists and left-wing assassins made him a controversial figure even in communist circles. Leon Trotsky even lived with Rivera and Kahlo in the Blue House for several months while exiled in Mexico. 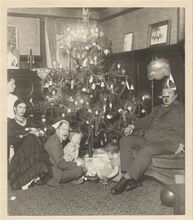 Frida and Diego celebrate Christmas 1930 in the USA. Photographer unknown.
In September 1930, Rivera accepted an invitation to paint in San Francisco, California. After arriving in November accompanied by Kahlo, Rivera painted a mural for the City Club of the San Francisco Stock Exchange.

In 1931, Rivera had a retrospective exhibition at the MoMA in New York City and Frida Kahlo was present at the opening of the MoMA exhibition.

His mural begun in 1933 for the Rockefeller Center in New York City, and was removed after a furor erupted in the press over a portrait of Lenin it contained.

Rivera married Frida Kahlo on August 21, 1929 when he was 42 and she was 22. Their mutual infidelities and his violent temper led to divorce in 1939, but they remarried in 1940 in San Francisco. He died on November 24, 1957 and was buried in the Panteon in Mexico City.